Did Not Cure Cervical Cancer: Recurrence After Twelve Years

In order to detect this type of cancer early, women are asked to take a Pap test regularly. The rationale is that cervical cancer can often be cured if found and treated at its early stage. How true is this statement?

An Tee (not real name) was fifty-five years old when she was diagnosed with cervical cancer. This was in 1996. Fortunately for her, the cancer was at its early stage. Her doctor felt surgery and radiotherapy were adequate to deal with her problem. An Tee underwent to remove the cancer and this was followed by twelve external-radiation treatments. In addition, she received internal-radiation treatment. The latter involved an exposure of radiation-tube implanted in the vagina. An Tee was kept isolated in the hospital for two days while receiving this treatment.

An Tee was asked to visit her doctor every six months for routine check up. Everything was alright. And life went on as usual. Ten years after this “apparent cure” An Tee started to cough since 2005 (i.e., about three years before this relapse). However, her doctor did not consider anything amiss and she was told everything was alright.

In August 2006, i.e., twelve years after her diagnosis, An Tee was told that her kidney was not functioning well. A MAG-3 Lasix Renogram was performed. The results showed that An Tee’s left kidney had normal function but her right kidney was hydronephrotic with reduced size and function and was significantly obstructed. Essentially there was only minimal (ten percent) right renal function.

A CT scan of the chest indicated both lungs were studded with numerous nodular lesions of varying sizes measuring 5 mm to 25 mm. A dominant 3 cm nodule was seen in the right lower lobe. There were also multiple small mediastinal lymphadenopathies in the aorto-pulmonary window and pre-aortic region. In short, the CT scan revealed An Tee had extensive lung nodules in both her lungs that had also spread to the adjacent lymph nodes. 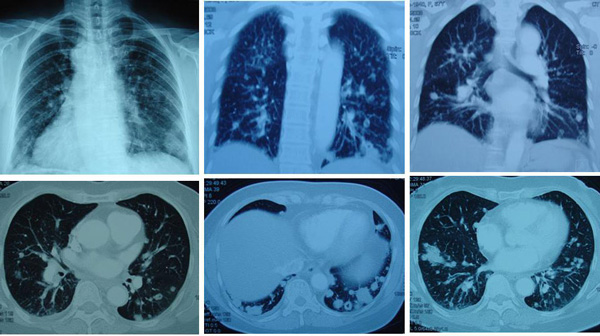 A biopsy was performed resulting in bleeding and An Tee’s stay in the hospital had to be extended. The histology results showed the lung parenchyma was infiltrated by malignant cells. The pathologist concluded that it was a moderately differentiated adenocarcinoma – representing perhaps a metastasis or TB.

An Tee was asked to undergo chemotherapy. She and her entire family refused and opted for herbs instead.

An Tee had been on the herbs for the past 9 months. Then at about 7.30 a.m., 15 June 2009, our phone rang. We were told An Tee had just expired. The only daughter in my grandfather’s family was lost to cancer. In spite of this loss, we were glad that at the end, An Tee did not suffer any pains. At the later stage of her illness, An Tee became breathless and she had to use oxygen mask to help her breathe better. That was about the only discomfort she had.

I flew home to be with An Tee’s family during this time of grief. Her face looked sweet and natural. This image remained imprinted in my mind. Above all, everyone in the family remained grateful that she died without any pain or suffering, that is so typical of many cancer deaths.  When her time came, she took two deep intake of air that morning and she passed off.