Wang (not real name, M872), 48-year-old male from Medan had been living with “blood-in-his-stools” for the past ten over years. This problem was attributed to piles. In November 2010 he came to a private hospital in Penang for a medical checkup. A scope of his colon did not show anything wrong. However, an ultrasound of his abdomen showed an ill defined, 7 x 9.2 cm mass in the right lobe of his liver. 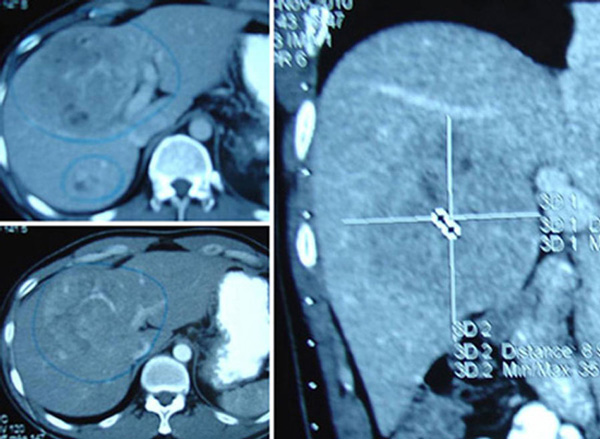 CT scan done on 12 November 2010 indicated a 8.2 x 7.2 cm mass suggestive of hepatoma in segment  8 of his liver. A small solid lesion is also found in segment 7 measuring 1.8 x 1.2 cm. This may represent a satellite lesion of hepatoma. A simple cyst is noted at segment 8 below the right hemidiaphragm.

Wang went to see another doctor in another hospital. A repeat CT scan was done on 13 November 2010. The results were similar to the one done a day earlier.

The surgeon suggested that Wang undergo surgery to remove the tumour. The operation would cost RM 40,000. After the operation, Wang would have to undergo chemotherapy. The cost of each chemo is around RM 4,000 to RM 5,000.

Wang and his wife were disappointed and decided to go back to Medan without doing any surgery or chemotherapy. Someone learnt about their predicament and suggested that they come to CA Care for advice. We spent more than an hour with them. Below is a video recording of a part of our conversation that day.

1.    Most of the story-telling was done by Wang’s wife. She only talks Chinese! It appears to me that she is a “smart and wise” lady even though she is not educated.

2.    She said: “When the doctor (surgeon) said that my husband had to undergo surgery and chemotherapy, I knew that this is a serious case”. This shows that she is not a dumb, naïve village girl – never mind if she does not know how to read the CT scan report or figure out what the blood test shows.

3.    I asked her: “Did you ask the doctor if surgery can cure his cancer.” She replied yes. Most patients who come to us did not do that! How could that be? They don’t even want to find out what the prognosis is like! Not this lady.

4.    She even asked the doctor: “What if we do not do the chemotherapy?”. The surgeon replied: “It is like cutting the lallang. You need to apply chemical after you mow it down. Only then can it be eliminated.” The answer was right on spot because this lady works in the farm – she understood it well. To kill off the lallang you need to apply chemical poison. Sometimes the land had to be dug up or overturned to get rid of the rhizome. So she said: “Then what would that do to my husband?” The implication is – what would happen to the patient if you poison him like you poison the lallang?

5.    She also asked the surgeon: “When you cut up my husband, what are the chances that his cancer is cured?” Again this kind of question is never asked by most patients before they undergo an operation. The surgeon replied: “More than 80 percentage success rate.”

6.    I asked the lady: “The doctor said 80 percent success – did you believe him?” She replied NO. I asked her why. She said: “There is one statement that the doctor made which got stuck in my head. Earlier I asked the doctor about the risk involved – how certain was he that everything would turn out right.” The doctor replied this lady: “The same case like you flying in from Medan to Penang. The airline does not guarantee that you are risk free.”   Though the doctor did not admit outright that the treatment has risk, his reply very much implies that there is risk – the lady got the answer.

7.    Later in our conversation, I came to know that Wang’s sister also had liver cancer. She received chemotherapy. She died after four cycles. While many patients or their loved ones appear naïve – don’t under estimate them! They have gone through some bitter experiences in life and they are not about ready to forget them. For such people, doctors need to do a lot of convincing to make them accept chemotherapy again.

8.    I feel sorry for this couple. They came all the way to Penang and had to spend so much money. They can do the treatment – no problem about that for as long as they can pay the hospital bills – but cure appears to be elusive.

There is one important lesson we can learn from this story. How reliable or true are statements made by a doctor? Is it backed by good statistics and good research? At this point I am reminded of what some doctors wrote. Let me quote.

Dr. Block, herself a doctor, wrote in the foreword of Fight for Your Health: “Don’t just blindly follow what your doctors say. Find out the truth for yourself.”

Dr. Mendelsohn, in his book Confessions of a Medical Heretic wrote: “Doctors in general should be treated with about the same degree of trust as used car salesmen. Whatever your doctor says or recommends, you have to first consider how it will benefit him … because surgeon gets paid when he performs surgery on you, not when you’re treated some other way.”

Dr. Chestnut in his book, Lying With Authority wrote: “Somebody has got be lying – lying with an air of authority. The vast majority of surgery and drugs, including chemotherapy, does not treat or cure disease; it treats symptoms – often with devastating side effects.”

Dr. Hamilton in his book, The Scalpel and the Soul wrote: “As doctors, we generally don’t tell outright lies. We just don’t speak the truth fully.”

It is not nice to say that doctors tell lies – but the above quotations seem to say that some do, though they represent a minority. But I must say I like what Dr. Hamilton said: “We generally don’t tell outright lies. We just don’t speak the truth fully.” In this story, the surgeon told Wang and his wife that the treatment has more than 80 percent success.” His answer can be dead right or dead wrong! Let me explain.

From the perspective of this surgeon he is absolutely right to claim that the treatment has more than 80 percent success rate. A surgeon’s job is to cut up patients. After that he passes the patient to the oncologist or someone else. As far as he is concern his part of the cancer war is done. With the present state of the art technology, surgery carries minimal risk – like us flying in an air plane. The possibility of a crash is there but it is not likely (yes, it can happen!). Dying from surgery does occur although it is not likely.

But is that what the patient is looking for – just not dying from surgery? From the perspective of Wang and his wife, they are looking for a cure of his cancer! To them, the answer of 80 percent success takes an entirely different meaning. Cure means completely elimination of the cancer and it will not come back. That is what all patients ask for. Therefore, if patients are made to believe that they can attain an 80 percent chance of cure if they undergo surgery or chemotherapy is definitely false.

Let me repeat what Dr. Hamilton said: “we just don’t speak the truth fully.” Does this mean that doctors intentionally withhold some vital information which patients should know? If so, is that fair? I think the most vital information not told to patients is that though surgery is safe it will NOT cure the cancer. The chances of recurrence after an apparent successful surgery are very high. If you follow the case studies presented in this website, you will know that some patients die not long after their liver surgery.

Perhaps is this the reason why Dr. Mendelsohn said we should regard doctors in general “with about the same degree of trust as used car salesmen”?

In this article I have refrained from commenting if indeed the advice to operate is appropriate or otherwise. I would like to believe that the doctor has recommended this path with the best of intention. Even that, we need to be reminded that according to liver experts only 10 % to 30% of those who present with HCC are candidates for surgery. Meaning surgery is not the answer for all cases of liver cancer. Also surgery is good for only small tumours. Again, Dr. Mendelsohn’s words come to mind, they do this “because surgeon gets paid when he performs surgery on you”.

Let me conclude this article by trying to answer my earlier question: to what extent is the statement “after surgery there is a more than 80 percent success” true. I spent time reading my oncology books again. Below are the scientific facts written by liver experts. Read them carefully and come to your own conclusions.

Liver resection is the operation of choice for patients with tumors less than 5 cm in the absence of cirrhosis. In these patients, an operative mortality rate of less than 2% can be expected in experienced centers. Following liver resection, up to 75% of patients will develop intrahepatic recurrence within 5 years.  Source:  http://emedicine.medscape.com/article/197319-treatment