Tony was a 49-year old male. A CT scan of the abdomen done in November 2002 indicated mild dilatation of the biliary tree and pancreatic duct, likely due to a peri-ampullary neoplasm.

Tony went to Singapore and underwent an operation on 15 November 2002. A part of his stomach, duodenum, proximal jejunum, head of the pancreas and gall bladder were removed.

The histopathology report indicated moderately differentiated adenocarcinoma at the ampulla of Vater with ulceration of the duodenal papilla. After the surgery, the doctor told Tony that everything was removed clean. It was all clear. The operation was very successful. This made Tony very confident when he came home to Penang.

On 3 January 2003, Tony came to see us and was started on the herbs. On 14 January 2003, he went back to Singapore again for a review. A CT scan of the abdomen showed no evidence of local recurrence or metastases.

As a base line for monitoring his progress, I requested that Tony carried out blood tests regularly. The first test was done on 8 January 2003, five days after he first started to take the herbs and thereafter every three months. The results are as follows: 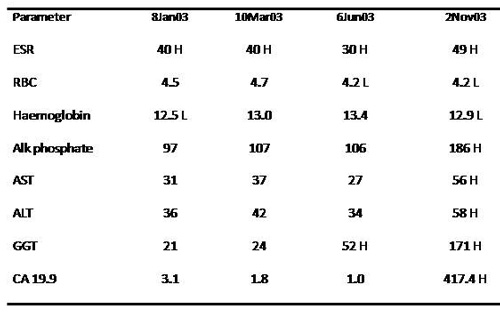 I drew the graph below on a piece of paper: The results for the first six months after taking herbs had been most encouraging. In fact we would say Tony’s condition improved with time. Then a bomb shell fell on 2 November 2003. Tony, his wife and sister-in-law came and presented the results of his blood test (see column 4) and wanted to know why everything suddenly had become bad. Can anybody explain that? I often tell cancer patients: I am not god and I do not know everything. Worse still, I cannot fix everything when things go wrong! You have to pay the penalty for what wrong you have done! 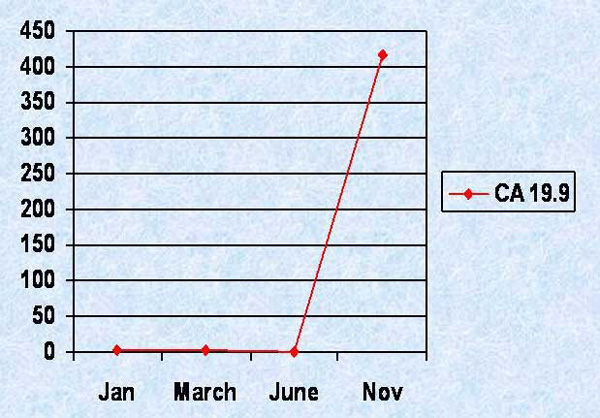 This was what I told Tony, point by point:

a)     Engineers (and Tony was one of them) were taught that 2 + 2 = 4. Take x buckets of sand, y bucket of pebbles and z kilos of cement, they can make a building according to the engineer’s specification. Unfortunately, this thinking does not necessary work in biology – when you are dealing with the science of life. Good blood test result does mean cure. It does not mean there is no cancer!

b)     Look at the graph. In January, March and June, the CA 19.9 was almost zero. But from June to November, the value had shot up to 417. Why? How could this happen? I asked Tony: Can you tell why? You are a professional. An educated man.

c)     We all can agree that the graph does not tell a lie. Honestly, tell me, what you did differently in July, August, September and October? I did not know what you did, so I cannot guess. Tell me honestly what happened in those months.

Reluctantly, Tony told me that in August 2003, he moved his job position from Penang to Kuala Lumpur because he has just won a project. In January to July he lived in his home in Penang with his family. His wife took care of him and kept an eye on his diet. In August he had to live in a hotel in Kuala Lumpur and needless to say, he was living on hotel food. Although he did not tell me, I came to know that he also traveled to some countries in Europe on business trips. All this happened after August 2003. And in November – barely three months after that, we could see the damage done.

Many cancer patients told me that it takes about two to three months after their misbehaviourbefore they suffered serious relapse.

As much as we would like to help, there was nothing much that we could do for Tony. The last time I saw him was on 2 November 2003.  Tony died in March 2004.

Comments: I am often faced such situations – patients coming to me and asked why their condition had deteriorated. My standard question is: What “sin” have you committed?  Go back and think about what you had done – what you ate and what you did that you were not supposed to do – the answer is there. There is no need to pretend or try to play innocent.

For the record, let me tell you my impression about this patient.

Again, I say, we at CA Care are here to help you only. Your healing is yours to seek and achieve. To those who truly need our help, we say this: Live and don’t give up hope. There is a choice and there is an option. There is a hope. But if you want healing on your own terms and refuse to learn and change, then there is nothing much anyone can do to help you.