Dr. John Lee wrote: Chemotherapy is an attempt to poison the body just short of death in the hope of killing the cancer before the entire body is killed.

Most of the time it doesn’t work.

Der Spiegel, 4 Oktober 2004 had this article: Giftkur ohne Nutzen(The Useless Poisonous Cures): Increasingly sophisticated and expensive cellular poisons are being given to seriously ill patients … patients do not actually live a day longer. 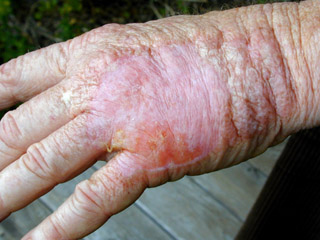 This is what it is like if a chemo-drug spills onto an unprotected hand.

The photos below show what could happen if the chemo-drugs leak out at the point of injection. 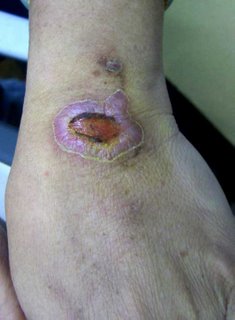 They are only effective in 25% of pateints.

What happen to the remaining 75%?

The Contribution of Cytotoxic Chemotherapy

Writing in the journal of Clinical Oncology three doctors in the hospitals in Sydney, Australia, concluded:

The Indiscriminate and Valueless Use of Chemotherapy

Does it mean that in the past, chemotherapy had been used on patients indiscriminately and that it was valueless? How about today?

What You Need to Know About Chemotherapy

Virtually all anti-cancer drugs are toxic and destroy the immune system.

They are poisonous and kill both the cancerous and the normal cells.

Patients undergoing chemotherapy may die of pneumonia or common infection.

Death from toxicity is also common. In one study, 10% of 133 patients died as a result of direct toxicity to the chemo­drug 5FU.

They can cause secondary cancers (such as gastrointestinal tract, ovaries and lungs) five, ten or 15 years after the successful chemotherapy.

Long term effects of chemotherapy can include heart damage and increased risks of recurrence.

Professor Hardin Jones, prominent cancer researcher and professor of Physics at the University of California surveyed global cancer of all types and compared the untreated and the treated. He came to this conclusion: